Earlier in the week I was fortunate enough to spend time with a friend of mine who has recently qualified as a physiotherapist. Discussing the relative merits of different exercises and training protocols, my friend lamented his profession’s reliance on cookie cutter protocols for rehabbing patients. In their view, many physiotherapists tended to prescribe 10 reps x 3 sets on exercises for patients regardless of their training experience, interest or age.

Now admittedly my friend has been strength training for the better part of a decade, which perhaps explains his enthusiasm for varying rep ranges across populations. Indeed in their training lifetime, they’ve used 5 x 5, 3 x 8, 1 x 20 and a host of other schemes. Hence they’ve experienced the effects that different protocols can produce. Ruminating however on their complaints, I realised that even outside the world of physiotherapy, people can adhere to rep ranges with a quasi-religious real. After all, when was the last time you heard someone promote 4 sets x 11 reps? Sacrilege….rep ranges must be divisible by 2 in the vast majority of cases!

Indeed, it’s not just the world of physiotherapy that has become enamoured with 3 sets x 10 reps. Many beginner and advanced programmes promote likewise. Certainly when I finished my first ‘real’ programme of 5 x 5, I was encouraged by older lifters to move to 10 x 3 for an introduction into bodybuilding. So with this in mind, today’s post examines the history of ’10 x 3′, a training protocol favoured it seems by gym goers and professional clinicians alike.

A regular lament on this website is how often lifters take their world’s for granted. Barbell squats seem to be timeless, yet they only emerge in the early twentieth-century. Likewise for the traditional benchpress. Our staple moves are really quite modern when you think of it. The same, unsurprisingly is true for 10 x 3 training, a training protocol popularised during the late 1940s and early 1950s.

Our story begins however, in the opening decades of the twentieth century with a boy from Alabama born in 1917. Christened Thomas Lanier DeLorme, the young man went through quite a few tribulations in his formative years. Battling with both the crippling poverty of the ‘Great Depression’ and a nasty bout of rheumatic fever, DeLorme’s adolescent frame was frail to say the least. Despite eventually coming in at over 6 feet in height, DeLorme the teenager was once bedridden for four months to aid his recovery from a fever which had stripped him down to 140 pounds. As recounted by those doyens of Physical Culture, Jan and Terry Todd, DeLorme used this time to study both medicine and muscle building.

In the first instance, DeLorme resolved to study medicine so that he too could help those in need of help. An altruistic goal accompanied by his second resolution to not only rebuild his physique, but to improve on it. Thus, the young man spent his time switching back and forth between medical books and the pages of Strength & Health, an odd but admittedly profitable combination. By 1939 DeLorme had been admitted to the University of Alabama to study medicine. From there he went to New York to further his studies and, as we’ll soon discuss, change the world of musculoskeletal rehabilitation. 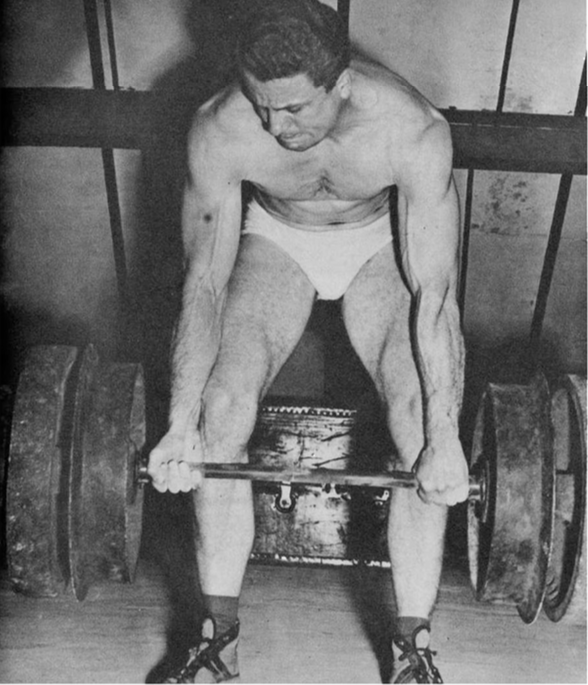 DeLorme during his College Days. Courtesy of Iron Game History

Once settled in New York, DeLorme was approached by a Sergeant Walter Easley to discuss the army man’s recent knee surgery. Told by doctors that he would never fully recover, Easley approached the Alabama man seeking help. Easley had religiously followed instructions to do light exercises for his rehab. Such advice was underpinned by the US’s first physical therapy instructor, R. Tait McKenzie, who believed that heavy lifting was injurious on the road to recover. A piece of advice many subsequent PTs chose to follow. DeLorme was not one of them.

In fact, DeLorme advised Easley to use the maximum amount of weight he could could muster for as many reps as possible. Using iron boots, Easley would perform leg extensions for as many as 70 reps on each leg. An unorthodox approach that resulted in an almost perfect recovery. As word of Easley’s rehabilitation spread, DeLorme’s profile grew. Other army men began to listen to DeLorme’s advice as his message of ‘heavy resistance training’ gained weight.

Luckily for DeLorme, and one supposes very unluckily for his patients, the United States was in the midst of WW2 when DeLorme’s rehab career kicked into action. This meant an almost unprecedented amount of soldiers were seeking help to recover from damaged ligaments, bones and stress fractures. A perfect sample size for DeLorme’s theories. DeLorme soon joined forces with Dr. Arthur Watkins, who held similar views and history began to be made.

In 1945, DeLorme wrote a paper, “Restoration of muscle power by heavy-resistance exercises,” published in the Journal of Bone and Joint Surgery. Utilising over 300 cases, he found a

splendid response in muscle hypertrophy and power, together with symptomatic relief

once patients adhered to his method of 7-10 sets of 10 reps. Lifters would begin with a light enough load and ramp up until their 10 rep max was used. Nevertheless, in 1948 and again in 1951, DeLorme and Watkins revealed a change in their thinking

Further experience has shown this figure to be too high and that in most cases a total of 20 to 30 repetitions is far more satisfactory. Fewer repetitions permit exercise with heavier muscle loads, thereby yielding greater and more rapid muscle hypertrophy.

Thus, DeLorme and Watkins began to advocate less reps but with an emphasis on heavier weights. Now importantly they did this using scientific studies. Studies that were more replicable than the advice of the big guy at the gym. Alongside several other authors, the two co-wrote and edited, ‘Progressive Resistance Exercise’. A medical tract published in 1951 that was one of the first large scale training books of the era. A starting point for exercise science in many ways.

Somewhat frustratingly I actually owned a copy of this book but it was lost alongside several other works in a recent move. Such is life eh? Thanks to the excellent Dave Draper forums, we can still get some snippets from the book without me having to buy another copy!

“The development and decadence of tension should be smooth and even with no rest pause at the height of the movement or its termination at the initial starting position. The load should be neither swung forward with a ballistic movement nor dropped under the influence of gravity.”

On the number of reps:

“The number of contractions per bout is arbitrarily set at ten. If fewer repetitive lifts were required, the resistance could be increased. Whether ten is the optimum number for rapid increase in strength has never been established in terms of criteria other than the empirical practice of weight-lifters. It is probable that the number closely approaches the optimum.”

On the duration of rest between sets:

“The length of the rest pause between bouts is important only in so far as it affects the total work which can be done in any single treatment period. Short rest pauses probably reduce the number of bouts which can be carried out and still lift the prescribed load ten times. What ever evidence exists tends to indicate that protracted exercise is not the prime requisite for the augmentation of strength. The power developed is important; that is, the amount of work done in unit time. Short-lived but intense exertion is the objective which should be kept constantly in mind.”

“The elevated temperature within the muscle is now thought to affect the viscous and elastic properties of the contractile tissue in a manner designed to augment the work done at the same production of energy by accelerating the chemical processes involved..
“By initial use of small muscle loads and increasing them after each set of 10 repetitions, the muscle is warmed up preparatory to exerting its maximum power for 10 repetitions….

“By doing 10 repetitions only with the 10-RM strength increases would be approximately the same as when three sets are performed. In fact, if it were not important to set the physiological stage preparatory to a maximum exertion, only one set of 10 repetitions would suffice.

This has been demonstrated time and again in the clinic in the treatment of injuries in young athletes. . . . Incredible as it may seem, many athletes have developed great power and yet have never employed more than five repetitions in a single exercise. The amount of weight lifted seems to be the important factor in stimulating hypertrophy. Some investigators feel that it is the amount of work performed per unit of time that is responsible for strength. Observations to date, though not conclusive, indicate that it is the tension the muscle is driven to develop that, to a great degree, if not entirely, is responsible for stimulating hypertrophy and consequently strength.”

“Frequently patients are unable to perform 10 repetitions with the 10-RM if this resistance is applied without preliminary exercise with lighter weights.”

On the training effect on muscle:

“Increase in strength is accompanied by a measurement increase in size attributable to hypertrophy of previously existent muscle fibers rather than hyperplasia. The amount of connective tissue also increases and the sarcolemma thickens. There is an increase in the number of capillaries and the content of muscle hemoglobin, phospho-creatine, and glycogen. The net effect of all these changes is a gain in endurance which is sometimes striking.”

“In the initial publications concerning progressive resistance exercise, 70 to 100 repetitions were advocated, the repetitions being performed in 7 to 10 sets with 10 repetitions per set. Further experience has shown that this figure is too high, and that in most cases a total of 20 to 30 repetitions is far more satisfactory. Fewer repetitions permit exercise with heavier muscle loads, thereby yielding greater and more rapid muscle hypertrophy.” 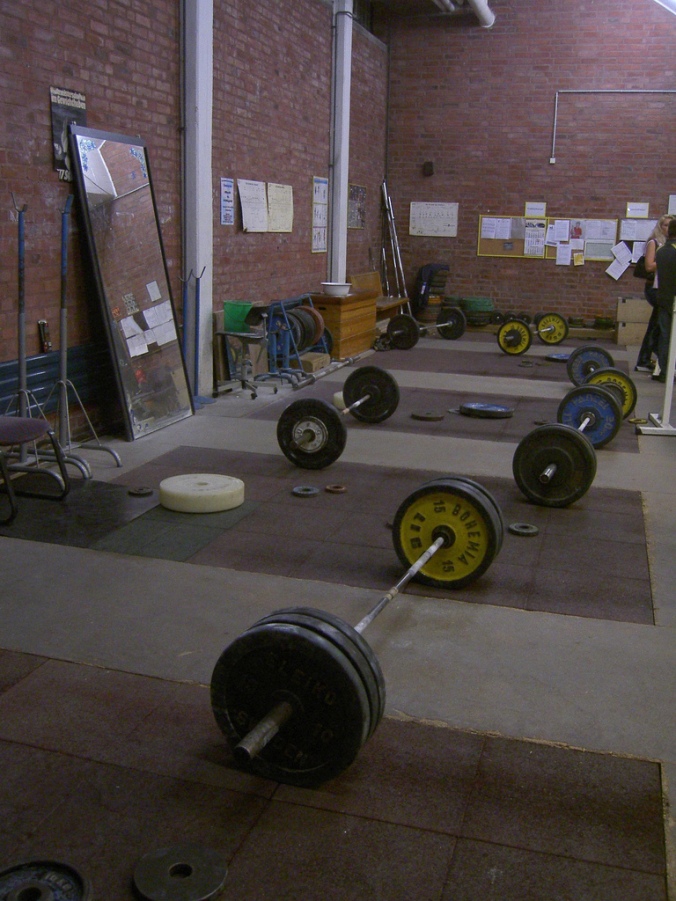 For physiotherapists, the allure is easy enough to explain. DeLorme and Watkins had produced replicable evidence that this training system helped build muscle and rehab patients. It was scientific evidence at it’s best. Furthermore it was easy to explain to patients and short enough for patients to adhere to it. Now whether or not the modern physiotherapists my friend was referring to actually follow these protocols to the tee is a different matter. Many it seems, simply suggest 10 x 3 without the emphasis on progressively heavier weights. This is however, a different story for a different day and undoubtedly influenced by the fact that for some strange reason not everyone has access to or the interest in going to, a gym.

For bodybuilders, the appeal of this approach is somewhat trickier to pin down. While DeLorme and Watkins targeted the medical community first and foremost, their interest in lifting brought them into contact with the bodybuilding and strength world. Indeed even in the 1940s, DeLorme was known to associate with people like John Farbotnik, the 1950 Mr. America. Similarly there are suggestions that the bodybuilder George Eiferman was familiar with DeLorme, although this has been harder to pin down. The truth may in fact be that DeLorme and Watkins had simply found the science behind a training protocol already in use by the bodybuilding community. Certainly the old Bob Hoffman courses used to advocate 10-15 reps.

What was unique one suspects about DeLorme and Watkins’ approach were the recommendations about the training loads (i.e. 50%, 75% and 100%). The longevity and popularity of their protocols may be down to the fact that it’s effective. Something anyone who has tried it out will tell you and it’s for that reason that the approach is still advocated by modern trainers (as seen here).

Have you ever tried this approach? How did you find it? Let us know in the comments below!