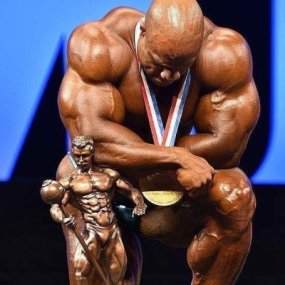 With the Mr. Olympia one week behind us and the result shaking the foundations of professional bodybuilding, I believe it is an opportune time to review Gifted, the Phil Heath documentary.

To be honest, I had no idea such a documentary existed; not only that, but that there was also a sequel (which will be covered rather quickly). The title Gifted gave me the impression that the film would be filled with testimonies of how Phil Heath, who is termed ‘the Gift’ had amazing genetics, that it’s a family thing, that while growing up he was muscular, and that, oh yeah, he had good genetics. I must admit I was pleasantly surprised.

Second, and please do not judge me for this, I am only human; I had my ticket for the Phil Heath hate train, and was even standing on platform 9 and ¾ considering running at full speed in that wall and simply disliking the man. One must not forget what was said about Heath: “it’s very easy to hate Phil Heath.” My motives were clear though, I thought he was cocky, saw him as the “villain” in bodybuilding, and didn’t think he put in as much work due to the fact that I was hearing this “genetic” card being played over and over again. Well, I am not embarrassed to admit that I couldn’t be more wrong.

Now that my testimony is out and I managed to plug some Harry Potter into this, on to the review.

As mentioned, Gifted was unknown to me. While The King received a lot of media coverage, I’ve never seen anything regarding this particular film. While browsing the regular time-spenders on youtube, Gifted came across my feed. Turns out it was released in 2015 and was pushed out onto various social media platforms one week prior to the 2018 Mr. Olympia contest; talk about seizing an opportunity.

The documentary opens with Heath’s fifth place finish at the 2009 Mr. Olympia. Amidst introduction credits, we find Heath, shocked and frustrated about his placement stating “I just gotta bounce back, I mean, you know, measurement of a man is not how you win, it’s what happens when you lose, and…what you do after that; we’ll see what kind of man I am.” For those of you who know Phil Heath, you can smell the foreshadowing in this statement from a mile away! From those of you who don’t, pay close attention.

The film fast tracks 2 years, and this is where we are settled into the “present” setting. Director, Jonathan McFarlane follows Heath as he trains and seeks to finish first at the 2011 Mr. Olympia, ending Jay Cutler’s reign. While the movie offers what you expect in terms of following a bodybuilder to his competition (typical of Pumping Iron), Gifted offers so much more.

While viewers will be able to see A LOT of Phil Heath, the great thing about this documentary is its access to the bodybuilding world. Not only does Phil Heath explain how bodybuilders make a living off stage, but we can also see the behind the scenes of fitness expos, behind the scenes of the Olympia contest, preparation for seminars, the intricacies of the supplement business, a step by step of the Olympia contest itself, defining the pose down, the art of tanning, and the judging. If you don’t like Heath, a least tune in for that! Very rare do we see or read anything that Heath opens up about – a breath of fresh air for any bodybuilding fan.

As expected by, I’m sure most of you who have been following Heath, we hear the word “genetics” a lot. Not only that, but the word “calves” comes up at a rate that forced me to pause the video and look down at mine for no apparent reason. Without spoiling anything, Heath had big calves as a child (don’t worry, you’ll hear that more than enough times.)

BUT, this is where it gets good. It seems like Heath, aware of this narrative on social media and various other documentaries, chose to dedicate a big portion of this documentary filming himself working out, and let me tell you, guy puts in the work!

The way I can best explain while remaining in topic is that, possibly genetics had a part in his physique, giving him the title ‘the Gift’. But he is gifted in his ability to push through barriers. I know of a few people who could go to where Phil Heath is during his training; beyond the pain, beyond the blackouts, beyond the mental barrier that begs you to stop (to which most of us abide). If Heath wanted to prove everyone wrong, he did so in this movie.

A Man of the People and a Realist

For me, this is where the value of the documentary is. Viewers are finally able to see Phil Heath’s true colors as a human being, away from the stage, away the magazine covers, and dare I say it, away from Generation Iron whom Heath himself states “portrayed him as a villain” in Generation Iron.

First of all, Heath presents his personal trainer Hany. Calling Hany his brother, Heath shows his love, respect, and thanks to the man who brought him where he is today. I haven’t read on many bodybuilders, but I do not know of any who highlight their trainers in this way! Once again, a breath of fresh air for any bodybuilding fan, and any Heath fan (and haters).

Second, we are shown Heath, the man of the people. The amount of time Heath takes to chat with fans, to sign autographs, and to take pictures is beyond comprehensible. One night out of his Olympia contest he has to be dragged away by his promoters. And the signing is the least of things; Heath is attentive, listens to fans talk about their personal life, their fitness goals, and their achievements; to each he has a personalized response. He relates to some struggles, sympathizes with others, and gives his best advice where advice is needed.

Lastly, Heath the realist. Phil Heath brings everything down to manageable proportions. Bodybuilders are known for their “over-the-top” mentalities, and their forced ignorance of the outside world. Heath is well aware, and is transparent about them. Pleading that bodybuilders have to realize that what they do isn’t natural, and showing awareness that his body is a time bomb that needs attention for its longevity are some of the things viewers will hear from Heath himself.

He also addresses the point with which I opened – his attitude and his cockiness. Simply put, Heath mentions that he is aware of how people perceive him, but competition is in his nature. As he puts it “I have to reach high” – and he did, ending his streak with 7 Mr. Olympia titles.

Watch it. Heath fan or not, this documentary offers so much more than just Phil Heath. There is value in this film for any bodybuilding fan and any person simply interested in the sport and the lifestyle. It’s short duration and professional filming renders this a very enjoyable watch.

To End; the Sequel

A sequel to Gifted entitled And Still… is also available on youtube. Unless you are a true Phil Heath fan, I suggest you do not watch this one in particular. The entire film follows Heath to his third Olympia win in a very mundane fashion. A lot of walking around and useless conversation (with regards to history and “eye-openers”). As mentioned, fans will surely enjoy this one because you are literally following Heath around from his hotel room, to the elevator, to the parking lot, to another parking lot, across the street, and into the venue, ending with actual footage of the Mr. Olympia contest. Still enjoyable for bodybuilding fans as well; just not for everyone, unlike Gifted.