As some of you might recall from a previous article, Joe Weider, later assisted by brother Ben released Your Physique magazine in 1940 out of Montreal. Although their first attempt was modest, the (soon-to-be) Weider brand grew quite steadily to reach exponential heights.

However, the Weiders were not alone in the francophone Iron Game (without going into too much detail about Edmond Desbonnets out of France). French Canadian machinist Adrien Gagnon became interest in bodybuilding and health. After releasing health pamphlets (all in French) he released Santé et Développement Physique in March 1946 – the first francophone bodybuilding magazine out of Quebec. After this, his son Yvan labelled Adrien Gagnon as a “pioneer of physical culture.”

What are the Weiders to do?

According to the late James Woycke, there were discussions between Adrien Gagnon and Ben Weider involving the possibility of creating a merger in the companies. Weider approached Gagnon, proposing that Gagnon heralds the francophone side of things, while Weider supervises the anglophone part of bodybuilding (Joe Weider was already planning his move to New Jersey). Well, as some of you might have guessed, this never happened. Here are options:

Gagnon and the Merger.

Elsewhere I argued that Gagnon perceived himself as a vanguard for French Canadians, using his magazine as a way to get his message across, and to not instill the passion for physical culture, but also the desire to remain French Canadian and autonomous in the realm of bodybuilding.  (https://ir.lib.uwo.ca/etd/4552/) So, combining forces with Weider would have greatly jeopardize this vision and endeavor.

On a business standpoint, Adrien Gagnon was the sole francophone publisher in Quebec therefore it is safe to say that French Canadians turned to his periodical for health advice and the odd hair preservation techniques – thus having the monopoly on local francophone publications. It is also possible that Gagnon knew how the Weiders operated and simply refused to dive head first into a conflict business arrangement.

Regardless, any Weider follower knows that “no” was often unacceptable. 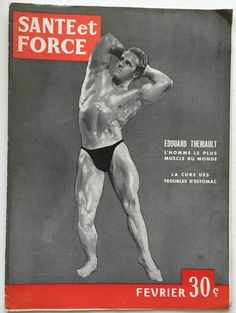 After being turned down by Gagnon, the Weiders simply decided to release their own francophone bodybuilding magazine entitled Santé et Force. Let me tell you, Adrien Gagnon did not take this lightly, but more on that later.

Now almost every post needs a “so what?” and here is mine. Not only did Weider just flat out publish a francophone magazine, ending the Gagnon’s monopoly and causing a rather big conflict, second to the Hoffman-Weider arguments, but after reading the dates it becomes somewhat mysterious. Gagnon releases SDP in March 1946, Santé et Force October 1946, showing that the Weider brothers wasted little time – as if when he hung up the phone Ben Weider turned to his brother and stated “it has begun”, I suspect with an intense sort of mysterious look on his face…

Content-wise, SF resembled Your Physique but written in French. Although the layout was somewhat different, the content was quite similar, although giving a little more spotlight to Canadian bodybuilders and lifters. At times, articles presented in SF were simply word for word translations of ones found in YP.