But, how do you know?

This particular gym opened its doors in the 1970s. Upon discussing with the owner I was told that he thinks this has followed him around since the very beginning, meaning it dates from the 1970s. Also, I know that this said owner grew up reading Weider’s francophone magazine Santé et Force. Up to now, everything points to the fact that this is an original Weider Super Armblaster. Finally, quick research provided me with this image: 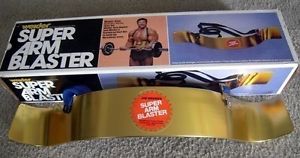 Clearly, this is the same armblaster I marveled upon in between my lat. pulldown sets (of 2000 reps, of course.)

Why all the fuss?

Why all the fuss?! No fuss, really. It just shows one of the many equipment that the Weider brothers came up with in order to market their business. In a time when fitness was on the verge to expand and become ‘mainstream’, Weider put himself ahead of the game with tons and tons of supplements, t-shirts, magazines, and useful (and at times not so useful) gym equipment. The problem, as historians, lies in the fact that we have no certainty that Joe Weider actually came up with this piece of bicep magic, or if it was given to him by someone else and he simply Weider’d it and began selling it through his magazines. This, as some of you might know, was common practice for both Weider and his archenemy Bob Hoffman.

The Stars and the Ads.

To cement his claim on the armblaster (if it was indeed thought of by someone else) Weider did what he did best; marketed the hell out of it. Weider not only used two of his biggest stars (Schwarzenegger and Robinson) to flex with the thing on, but also changed the name in 1975 to Arnold’s Armblaster, you know, because Arnold was heading for (or already won) his sixth Olympia and was the greatest thing to hit the United States since backyard barbecues (personally, I love barbecues). 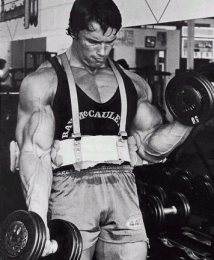 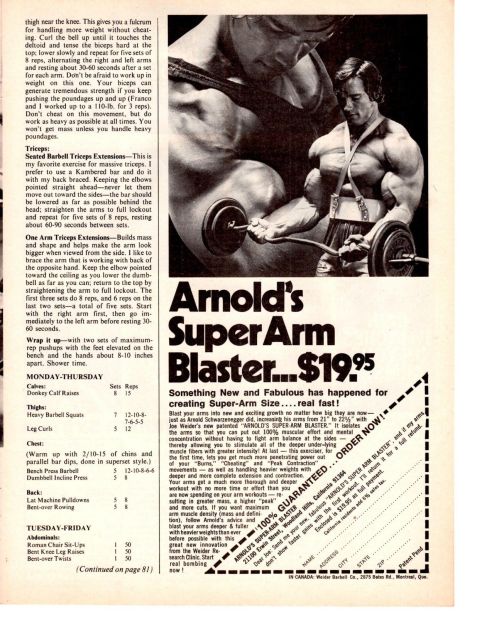 What does it do?

Apparently gives you “faster gains in the first workout,” and offers “peak concentration” to allow for a “much more thorough and deeper workout […].” (See above ad). With all honesty, it’s a neat piece of equipment to add spice to your arm workout. The limited range of motion allows you to focus solely on the movement of the bicep curl instead of worrying if you are “cheating” or not getting the right “peak.”

But the goal of this website is not to review equipment so I highly suggest you try to get your hands on one, flex a couple of times in it, look away from the judgmental eyes who have never seen one of these things, and maybe, just maybe, for once in your life, feel like Arnold.