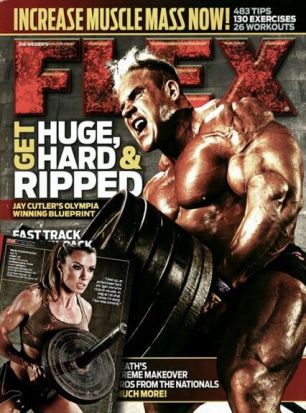 With the recent announcement regarding the “termination” of Flex magazine, let’s look at a very short history of the magazine.

Joe Weider’s first bodybuilding magazine was called Your Physique and was written and published from his kitchen in Montreal, QC, in 1940. With Muscle Builder as an additional Weider publication (which resembled Your Physique) a merger ensued to create the magazine most people know – Muscle & Fitness. Now, in the 1980s the fitness boom arose. This was great for the average Joe: lifting weights and focusing on your physique was now considered acceptable. However, for professional bodybuilders it can be considered troublesome for their legitimacy. The subculture of bodybuilding was threatened by the idea that men (at the moment) were able to attain size and pretty stellar physiques – often resembling the early ages of bodybuilding. At this moment, we can see professional bodybuilders gain more size and entrench their subculture into something unique (of course there is more to this, most bodybuilding history books will offer the full theory). The 1980s also saw the rise of stars such as Chris Dickerson, Samir Bannout, and 8 time Olympia Lee Haney – all of which displayed mass along with striation and dryness.

With professional bodybuilding on the rise, and mass slowly becoming the name of the game, an outlet was needed to promote this sport and this image; enter Flex magazine in 1983.

While M&F promoted health and lifestyle diets/exercising, with pictures of sport stars, movie stars, and the occasional image of Arnold (at least twice a month), Flex would sell their magazine with terms such as ‘mass’, ‘monster’, ‘size’, and ‘huge’. When opening an issue of Flex you knew who would be promoting which product, and what sort of topics were covered within its pages, which ultimately, was its goal.

Here we are in 2018 with Flex magazine discussing a merger with Muscle & Fitness. We are interested in seeing how this will pan out. Was this ‘merger’ due to a decrease in readership, a decrease in the popularity of the mass physique, or a way to save money? It can also be something else entirely, we are not here to speculate, but we will surely keep our eyes peeled to see how the new Muscle & Fitness will present itself now that hardcore bodybuilding has been included alongside the everyday fitness lifestyle.

If you have any information pertaining to this topic, feel free to drop a comment.