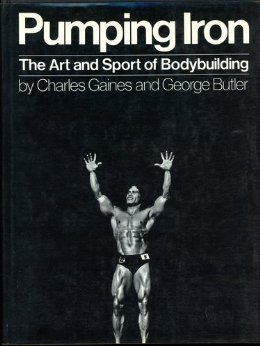 Written in the 1970s, Pumping Iron brings to light the covert yet fascinating world of professional bodybuilding. Charles Gaines explains the very basics of bodybuilding, from what lifting weights entail, to proper nutrition, and even does his best to provide his most accurate definition of the mystified pump.

Tagging along during competitions, readers can follow Mike Katz and Ed Corney in Baghdad leading to, and during the 1972 Mr. Universe contest; as well as Arnold Schwarzenegger and Franco Columbu prior to the 1972 Mr. Olympia. This first person account offers a great look inside the routines and lives of some of the top bodybuilders of the argued Golden Age. With George Butler behind the camera, the book is comprised of amazing shots of bodybuilders and their surroundings!

If you can get your hands on the revised edition, Gaines and Butler return to the world of Bodybuilding in 1980 and enumerates everything that changed in their 8 year absence – from the fitness boom, to Arnold in movies, and the advent of women bodybuilding.  A must read for any bodybuilding fan, bodybuilding researcher, or anyone who really loves pictures.