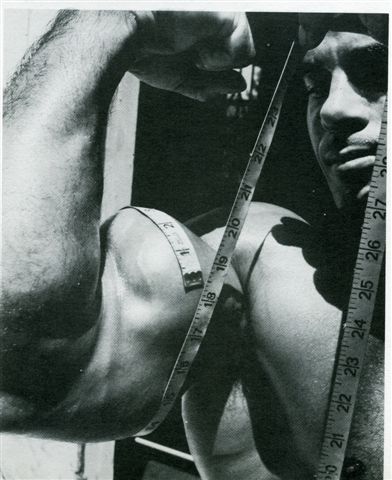 A ‘normal’ occurrence among most serious gym-goers is comparing ourselves to a higher being (professional bodybuilders, movie stars, bikini models, etc.) or to the people around us. Doing so does not entail perversion, far from it. It simply means that you have entrenched yourself into the healthy, or at times detrimental, practice of building your body. With proper body building comes measurement. Now we do not strictly mean pulling out the measuring tape and asking a buddy to pinch your skin with a caliper until it turns purple. This is also done visually. Every side-glance given to the guy repping it out on the preacher curl, or to the girl struggling through lat. pulldowns means that you are aware of one thing – the struggle of attaining physical perfection. Now the word ‘perfection’ itself is troublesome, even undesirable to use here at EII, so we will settle with Physical Satisfaction.

This practice of measuring for physical beauty has a longstanding history. In ancient Greece, physical contests were held in which male physical beauty was given high importance. Two contests were said to be held, the ‘euandria’ in which both strength and SIZE were measured to award a prize to the most beautiful man, and the ‘euexia’ which focused on manly body symmetry, definition, tone, and overall healthy appearance. However, there are no indications that these individuals were actually measured with tools, such as the trusty measuring tape.

The history of anthropometry itself, or the measuring of the human body, is blurry. Measurements were not strictly done on the muscles we love and cherish such as the bicep and the quad, but also on the skull, brain, even organs. However, in the 1700s, philosophers and art historians began commenting on the male body, strictly physically speaking. Men like Johann Winckelmann argued that man should strive to resemble ancient Greek statuary – in particular the Apollo Belvedere and the Hercules Farnese. Later, women were encouraged to emulate the physique of the Venus di Milo.

This idea of emulating the Greek ideal survived with the continuation of anthropometry. In the late 1800s, physical educator Dudley Sargent became interested in body symmetry and size which led him to measure some big names such as Eugen Sandown and Louis Cyr. In the case of Sandow, Sargent was pleased to see that the latter resembled ancient Greek statuary.

This continued into the late 1940s and 50s with David P. Willoughby and Alan Calvert who measured men and women, and compared them to the measurements taken from the Venus di Milo, the Farnese Hercules, and the Apollo Belvedere.

So in a way, when we compared ourselves to the guy peaking on the preacher, or the girl repping out on the pulldown, we seek to attain the physiques of ancient gods and heroes of myth…mmm I wonder if we can have as phenomenal beards as Zeus…