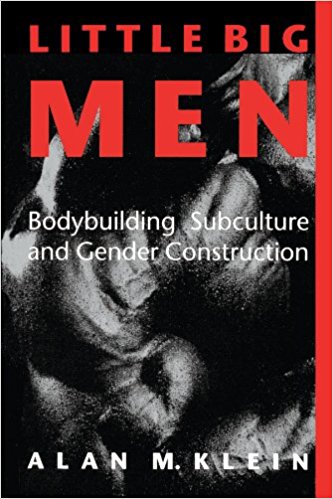 In Little Big Men: Bodybuilding Subculture and Gender Construction, Alan Klein integrates himself in a renowned Californian gym that he calls ‘Olympic Gym’. His integration in this milieu also means that he will be throwing himself in the world of West Coast professional bodybuilding. This extensive ethnographic study offers a clear view of bodybuilding as a subculture, depicting many of this subcultures key players, beliefs, and traditions. As one reads through this book, a distinct focus on hypermasculinity is apparent, as well as its attached terms such as narcissism, homophobia, and body facism. Klein’s straightforward writing, and use of participants’ statements as he received them in interviews, paints a complete and vivid picture of the bodybuilding cult and the difference between a ‘body builder’ and a ‘bodybuilder.’ A must read for any bodybuilding enthusiasts who are wondering what this world is all about. – Reference: Klein, A. M. Little Big Men: Bodybuilding Subculture and Gender Construction. New York: State University of New York Press, 1993.